Bring Your Doodly Stories to Life with Multiple Characters

Doodly makes it easy to create scenes with different characters. This helps you tell your story in a more engaging and visually appealing way. However, it can be difficult to make all the characters look like they belong to the same scene.  It’s not hard to understand why this can be a problem. When you have one character, he or she has two eyes and two arms, two legs, and so on. When you add a second character, he or she has two eyes and two arms — and so on. The more characters you have, the more potential there is for confusion as to which character belongs with which other character. The solution is simple: Make each individual character his or her own separate scene.

The first and most important thing to do when adding multiple characters in one scene is to think about your message. What are you trying to get across? Is it a story with one main character? Are you writing a copy that focuses on different characters in the same scene?

Adding multiple characters in a scene can be done in a number of ways. We listed down some of the commonly used techniques below:

It’s important for your audience to feel as though they’re watching real people interact with each other, so consider using hand-drawn animations or claymation video. And if you’re using motion graphics as well, make sure there are no sharp edges or jagged lines that could hurt your viewer’s eyes (some people have sensitive eyes).

Camera angles can be used to give a sense of depth, space and scale. For example, if you have two people talking in a room with a door, you can use two different camera angles such as a close up shot on one character and a far shot on another character. This will give the viewer the impression that both characters are standing in the same room but they look like they are far apart from each other.

Make each character slightly different from each other.

For example, if you want to create two characters that are similar but not identical, we can make them both wear the same clothes but with different shoes and accessories. Or maybe one character is wearing a shirt and the other wears a jacket? Or perhaps one is wearing jeans and sneakers while another wears combat boots? It’s up to you.

In order to have characters appear to be in the same place, you need to adjust their position so that they are all facing the same direction. By doing this, you can make it seem as if they are all part of a single scene.

Another way of making multiple characters feel like they are in the same location is by using different lighting for each character. You can use different colored lights or even different types of light bulbs on each character’s face so that they all feel like they are being lit by a different source of light. The best thing about this technique is that it makes it seem as if there is more than one character present at once, which will help keep things interesting when reading your work!

You can make characters look different by using different body types and facial features. You can also make them all look alike by using the same hair color, eye shape and clothing style.

Now that we know some of the techniques on how to effectively use multiple characters in a single scene, let’s apply some of it in Doodly.

In Dooly, there’s three things to consider in order to manage multiple characters in one scene. That is the character’s Arrangement, Opacity and Size.

When you need to showcase a character that is jumping in your video, it is easy to just find a character doing the jump action, add it to your Doodly scene and have it drawn by hand. While this technique works, there is another way to reveal a jumping character in your Doodly video.

Instead of using just one character, you can use three similar characters to give your scene a more dynamic effect. We listed down below the steps we need to take to achieve our goal for our first example.

The first step is to find a character that you can use for your video. Doodly has a wide range of characters with jump gestures that you can use. You can choose one from the options provided or upload your own image. For our first example, we have selected Aya from Doodly’s list.

The next step is to arrange the characters in horizontal order. After that, we need to adjust the size of each character from smallest to biggest. Make sure that the distance between each character is the same. 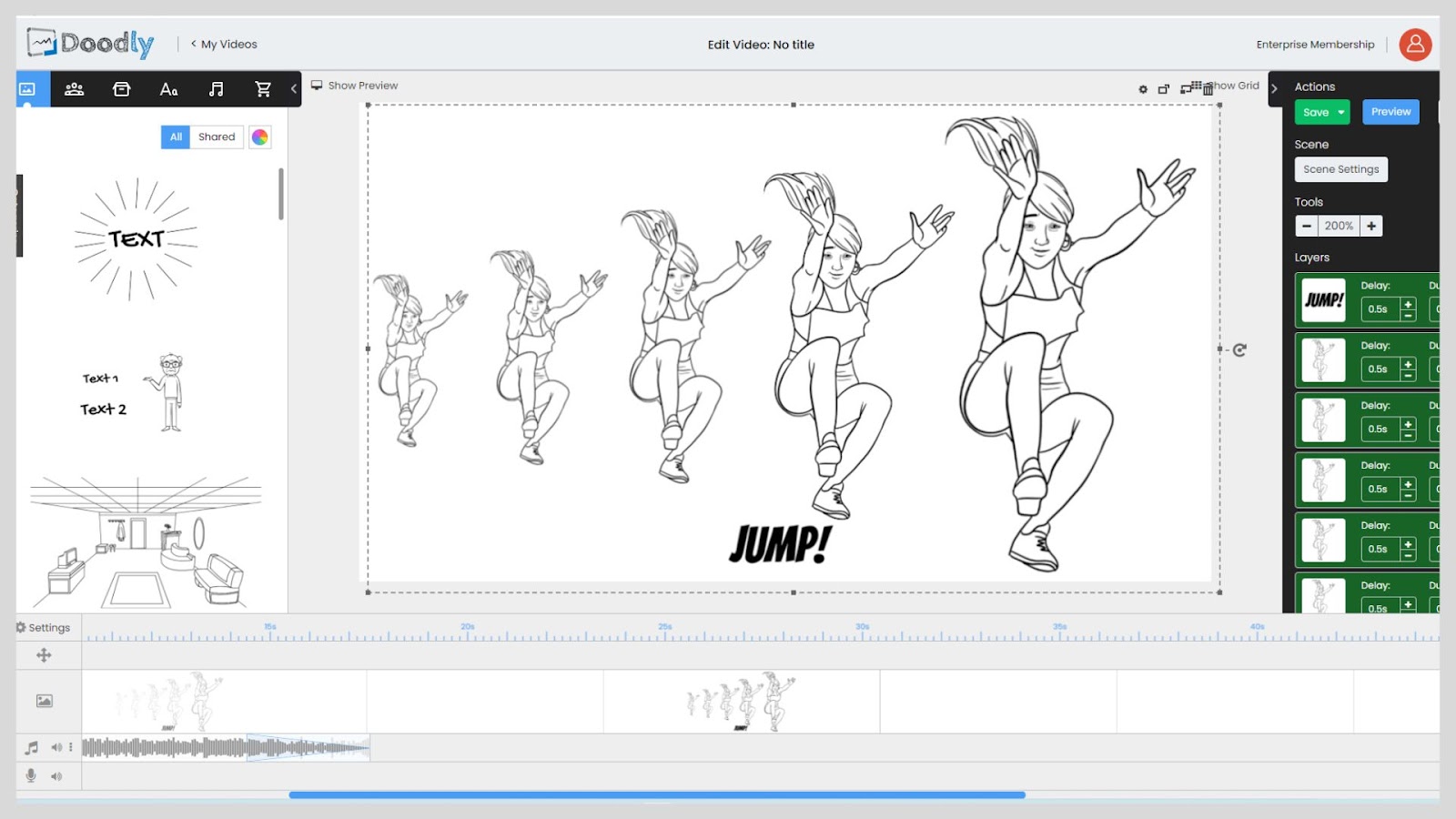 Lastly, we need to adjust the opacity of each character to set them apart from each other. You can set the opacity in an increasing order, from left to right. Say, the first character has 40% opacity, next is 50%, next is 70%, followed by 80% and the biggest image would have 100%. 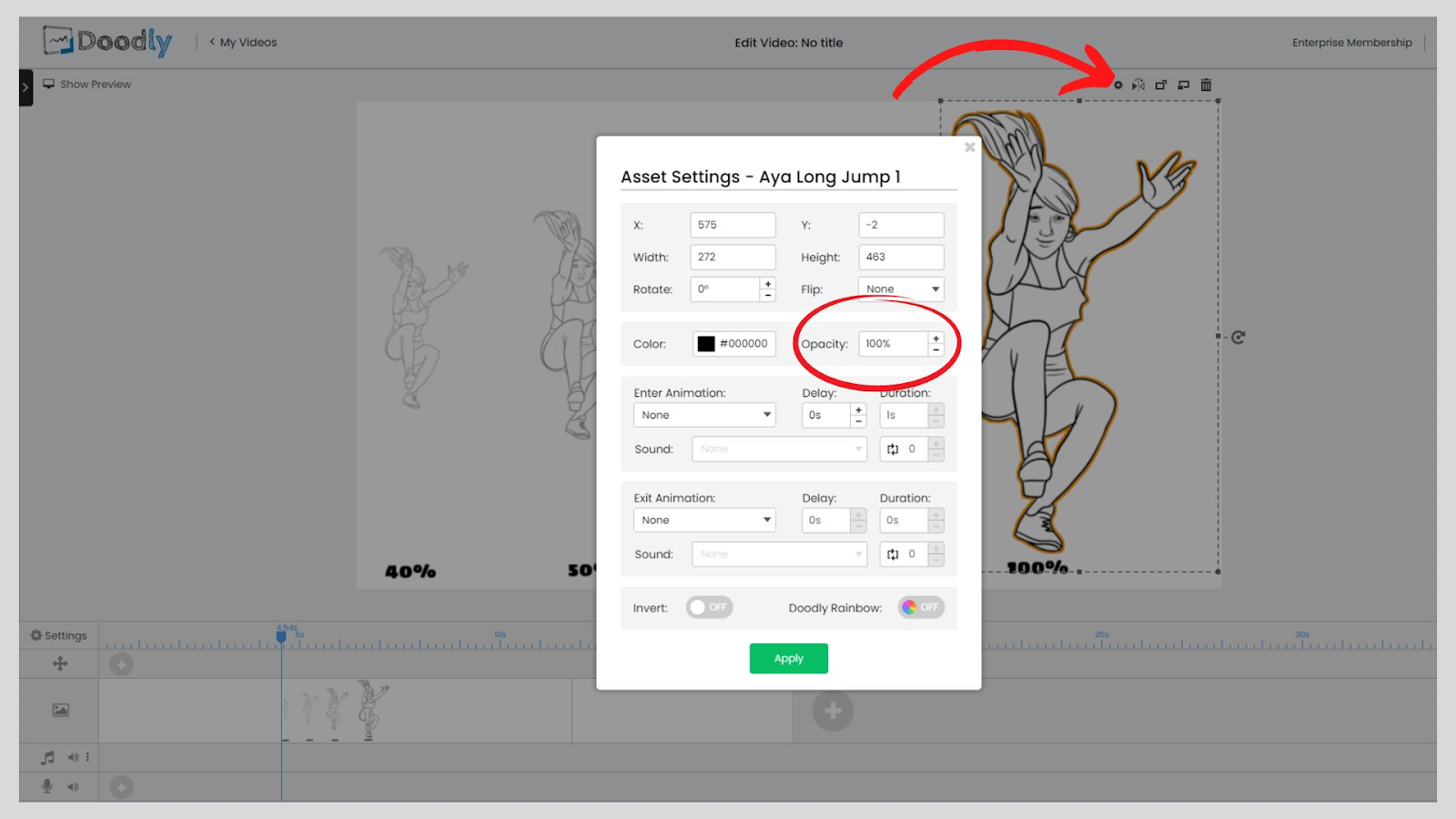 Let’s take a look at our video:

Now that we have an idea on how to work on multiple images, let’s try it on different characters. This time, they won’t be arranged from smallest to biggest. The character’s size will be at random and will be scattered in the same scene. We will still apply opacity to each image. The smaller the character, the lesser their opacity percentage. Depending on your video’s story, you can also add shadow to each character to define further their role.

Our last example is a bonus because we will be using a character that is outside Doodly. Apart from Doodly’s list of assets, we can also use characters from other free resources like PowerPoint. Yes, you can get characters from PowerPoint and the best part, you can adjust each character to capture the angle you like. This can give multiple characters more depth and movement. It can also help bind characters together so they can look relevant to each other. Now remember that not all characters will be available in PowerPoint but you can always check it out to see if there’s anything from their list that you can use.

To get assets from PowerPoint: 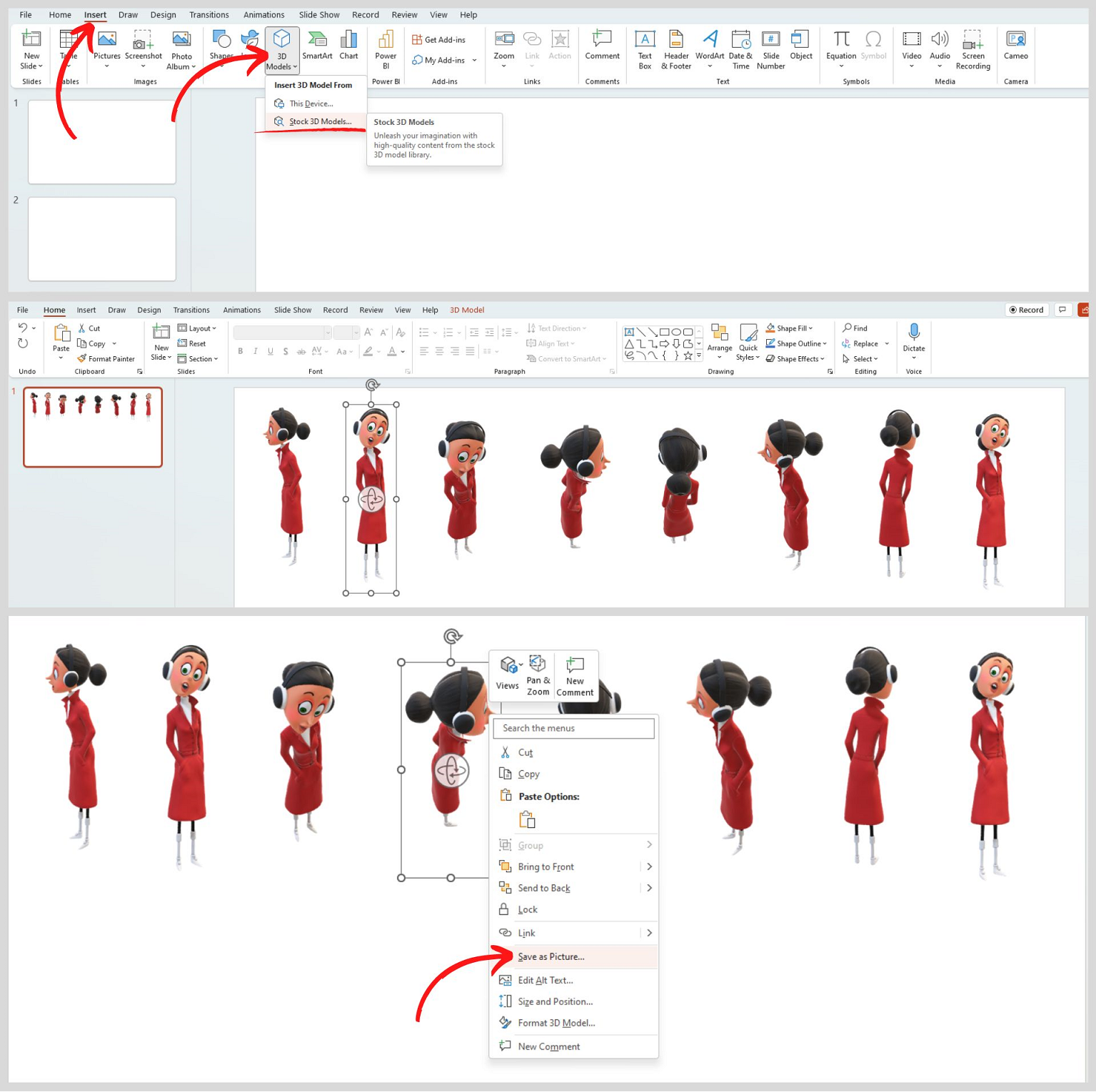 Remember that Doodly allows you to flip characters from left to right and vice versa. Having said that, you may want to just export the top or bottom view of your chosen character.

We created a template video using PowerPoint’s characters. Since it is a template, we did not include any voiceover or speech bubble on them yet. If you have a script ready, you may directly record your voiceover in Doodly.

Characters help illustrate stories. The more Doodly characters you add to your scenes, the more detailed and compelling your story will be. If you need to add several characters in a scene and want it to be quick and simple, remember to follow the three important factors: Arrangement, Opacity and Size.

Once again, feel free to mess around with the character layouts and timing of your panels to make them work better. Just remember that different approaches fit different situations better, depending on what you are trying to do in your story. An approach that may have worked well in the above scene may not be as effective in another situation—it all depends on what kind of character development or story progression you are trying to convey. Experimentation is the key to success, so get out there and play with your characters. Happy doodling!

Have you ever seen a product that made your head turn? It caught your attention, right? Now, that doesn’t necessarily mean you were interested in the product, but for some […]

Doodly makes it easy to create scenes with different characters. This helps you tell your story in a more engaging and visually appealing way. However, it can be difficult to […]

In the past, if you wanted to create promotional videos, you would have to go out and hire a videographer who knew how to make videos. That was a pretty […]