How to Crop Objects in Doodly

Assets used on a whiteboard animation play an important role in making sure that we capture our audience’s attention. We need to know the right placement of assets within scenes. That includes knowing the right angle and the right proportion of each image.

There are cases wherein we only want to use a portion of an asset. While it is easier to just import a new one, we prefer to use our existing asset because it goes well with our theme. To address this issue, we then need to cut the image and get rid of the unwanted portion. But, we don’t have an image cropping feature in Doodly, so how do we do cut portions of an image? Well, with a little technique, we can crop assets in Doodly.

“Cropping” means to remove certain portions of an image, usually its edges. It is one of the basic photo editing methods that we do in an image. It is fun, it adds visual interest and it’s easy to do.

We crop an image to:

These are just a few of the many reasons why there is a need to crop an image.

Below images are characters from Doodly. You probably remember them differently and that is because these characters have been cropped. Let’s check out how we’re able to crop the characters below as we compare these images side by side with their original photo. 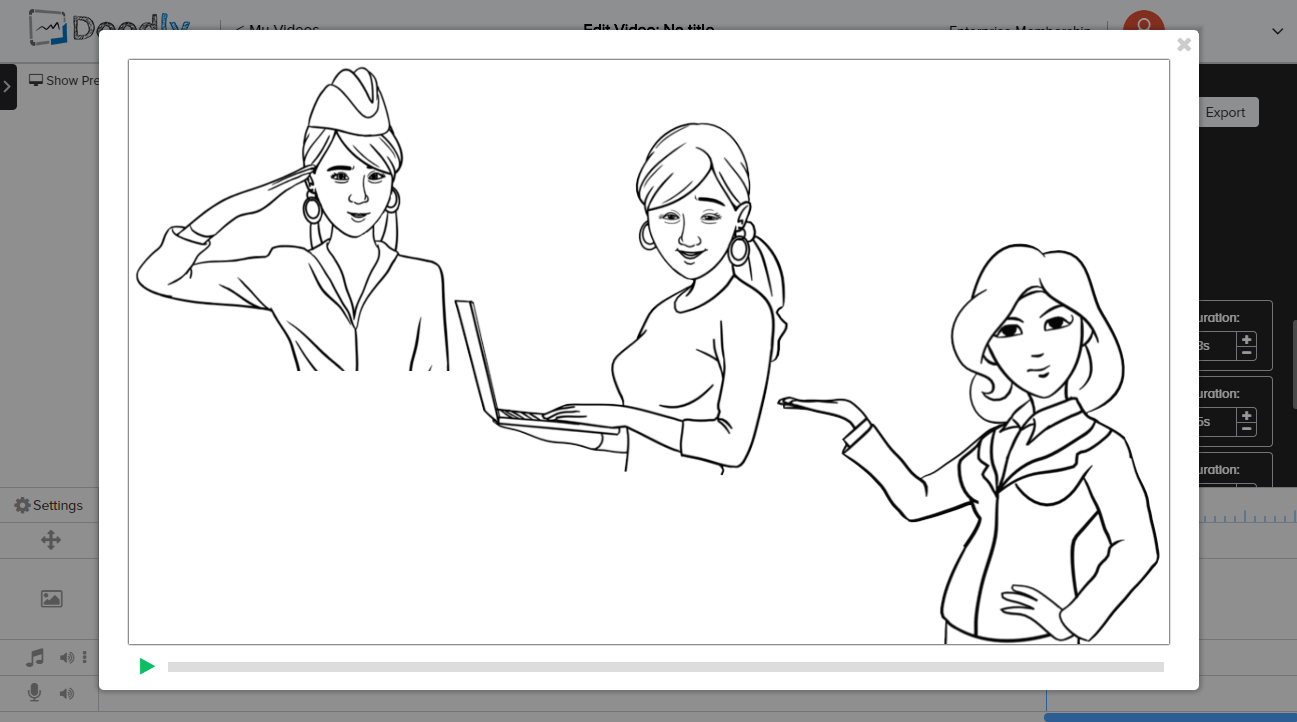 There are 3 workarounds to crop an image in Doodly:

A. Take a snapshot, crop and import

The first character we used is Aya. We’re looking to use a character of a pretty girl that does a salute gesture and Aya is perfect. In this image, she is a flight attendant. We don’t want to show her briefcase as well as her entire outfit. We just need to capture her face and hand doing the salute gesture and put her inside a frame. To do that, we need to crop her by using the “snapshot and import” technique. 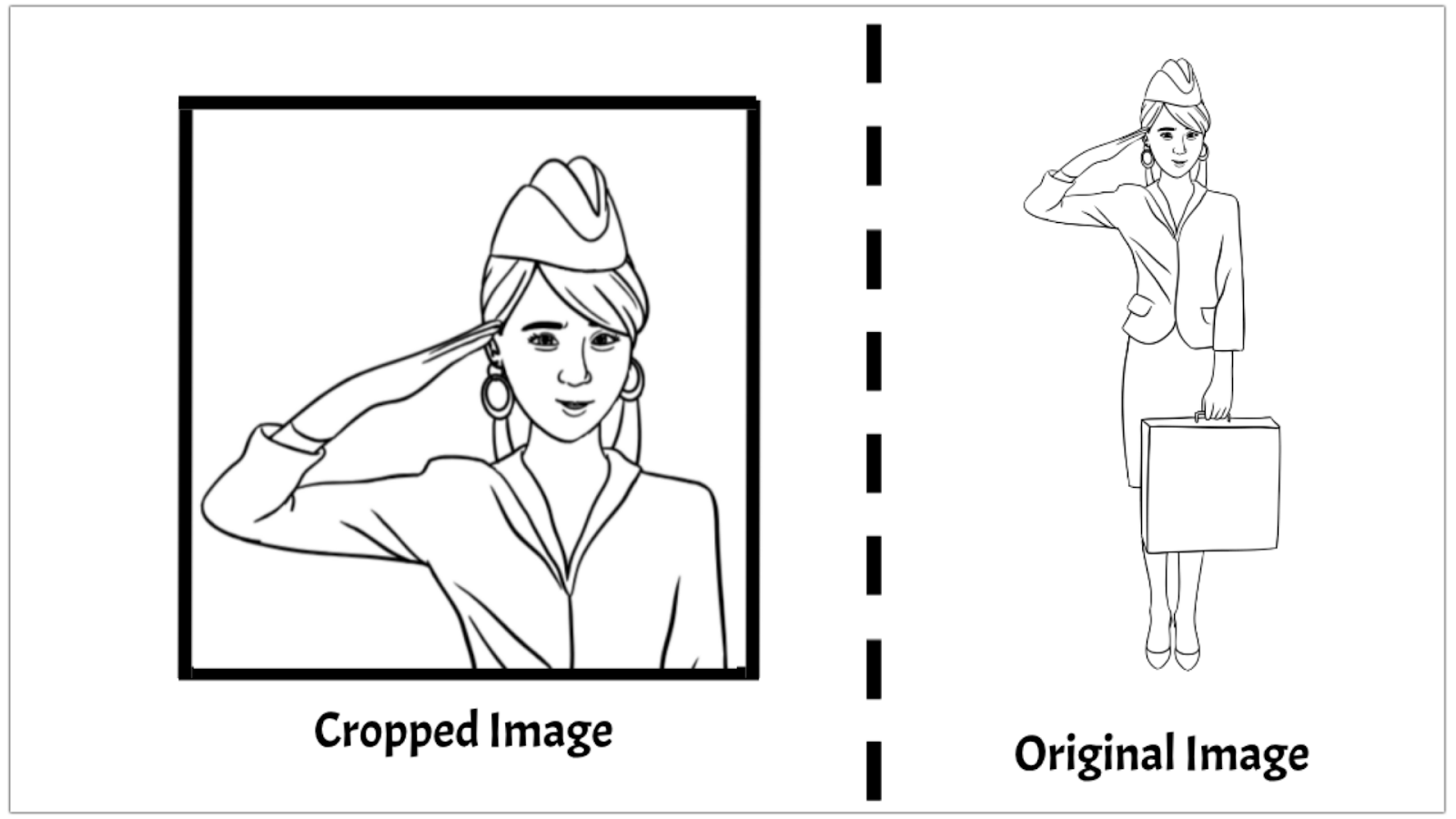 Here’s how we do that:

1. Locate the character you want to use and drag it in your blank scene.

2. Increase the size of your character and make the image as big as possible. Remember that you will take a snapshot of it so the image needs to be clear and not blurry.

3. Hit the Preview icon under the Actions menu and take a snapshot.

For mac users, you can press Shift + Command + 4 to capture a portion of your screen.

For Windows users, you can press the PrtSc key on your keyboard to take a snapshot.

You can use other screen capture software installed on your computer to take a screenshot of the previewed asset. You can also use it to edit the size of your image prior to saving it.

4. Save your screenshot on your computer and import it to Doodly. Don’t forget to rename it so you can easily locate it within the asset’s panel. 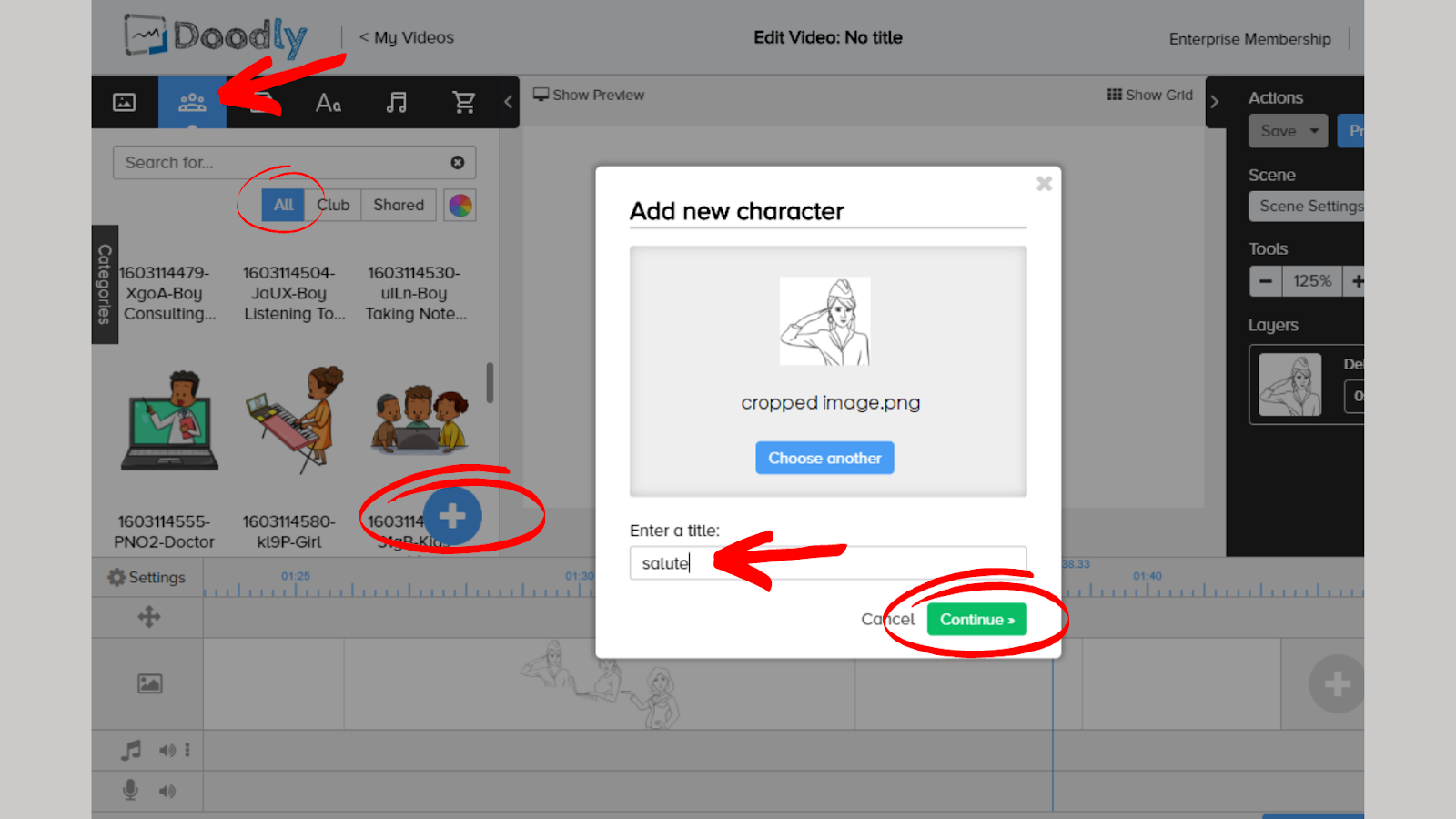 5. You can use the frame or square box props in Doodly for your frame. If the square box is either too big or too small for your image, you can always use the horizontal line under the Props tab in the assets panel to build a frame for your image.

Now remember, since this is a newly imported image, the hand will scribble it diagonally when drawn. Thus, we need to create their draw paths so they can be drawn accordingly.

To create your draw path, simply click the pencil icon and start placing those small dots within the draw lines of the character. 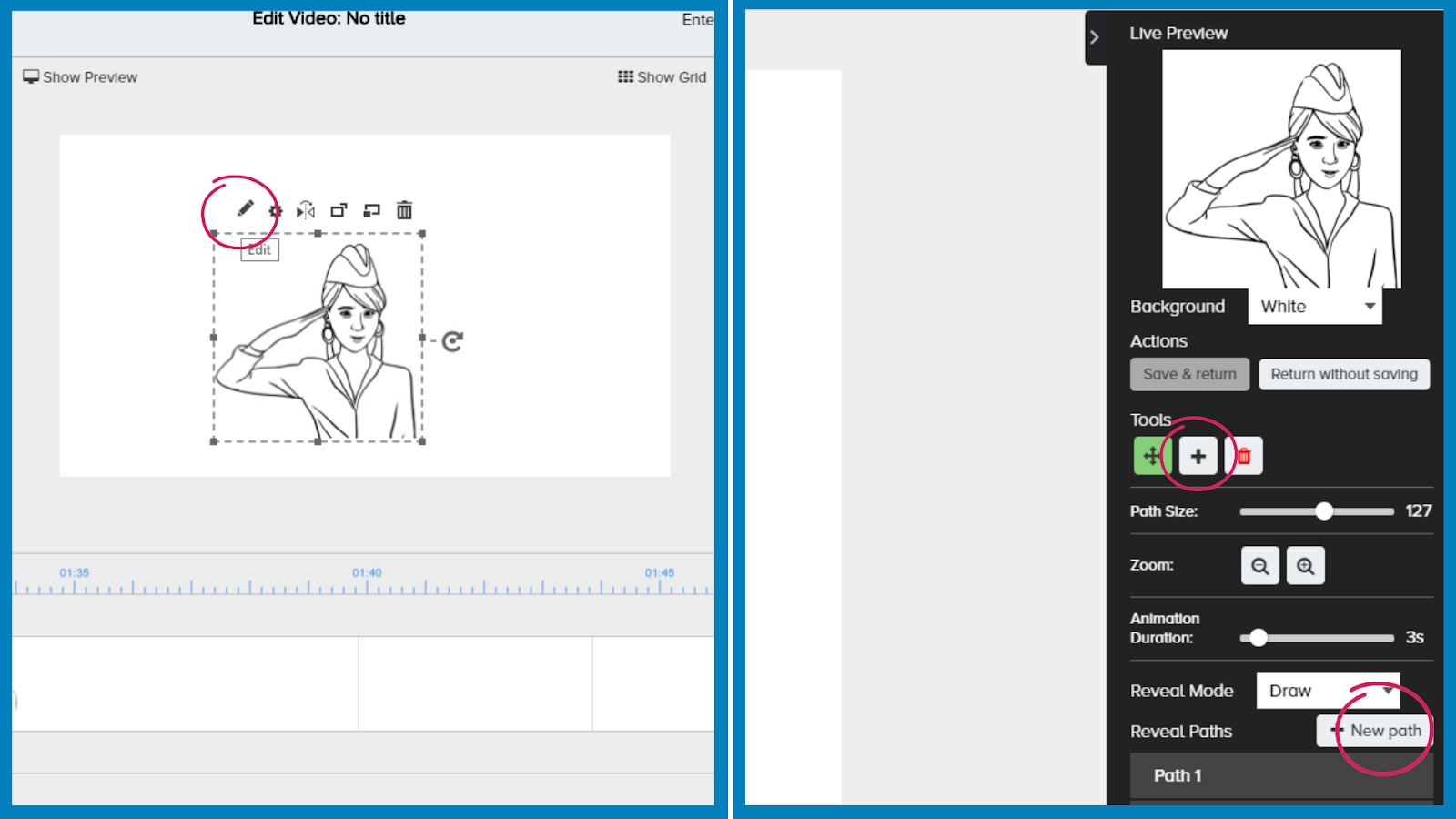 B. Increase the size of image

For our second image, we want a female character that looks confident, wears business attire, and hand gestures as if she’s presenting something. Agatha’s character as a manager is perfect for our scene. 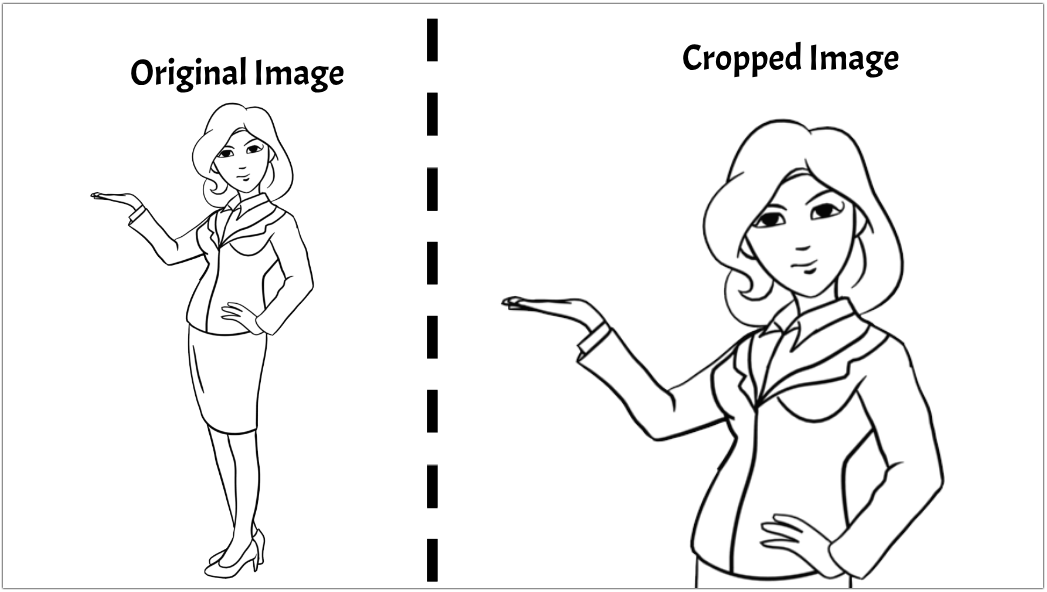 Unlike the first one, we did not cut any portion of her image. Instead, we just increased her size and positioned her on the screen. Who says that characters and objects have to be set at their default size, right?

Increasing the size of an image is so far the easiest way to crop an asset in Doodly. The downside of this technique is that if we want her to be drawn by hand, the hand will do its thing but it’ll also draw the entire image of Agatha. That means including the lower portion of her body even if they’re off the camera. In most cases, it’s almost unnoticed when you play the video. Just make sure to preview your scenes first before exporting them so you can make the necessary adjustments when needed.

For our last image, we need a lady who’s carrying a laptop and we found Aya’s character. We will use the upper portion of her body and crop the bottom but we won’t be cutting or resizing her image. Her whole body will still be on the scene but you will only see her upper body.

Here’s how we can do that:

2. Position the character to your preferred area within the scene and adjust the size accordingly.

3. Now it’s time to do some magic. Locate an object that can best cover the legs of Aya. For this character we used square. If the asset that you’re working with has curves, you can use a circle or oval objects to cover portions of it. 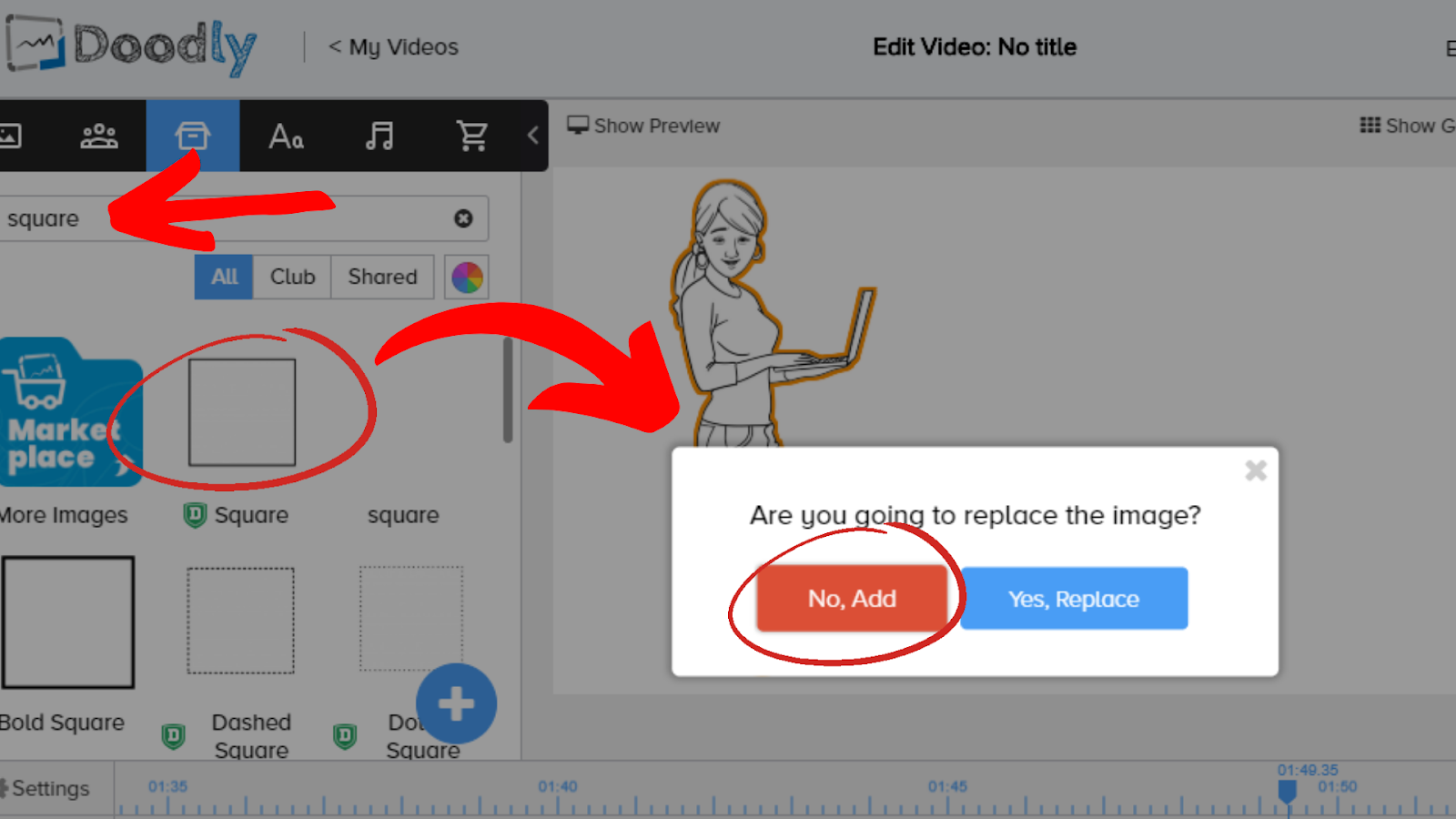 4. Place the square object on top of the portion you wish to cover, adjust the size and change its color to white. Now it is important that you use the same color as your background scene to create that invisibility effect.

5. Position your asset to your preferred location within the scene.

6. Set draw duration to zero for both character and props. If not, the hidden portion will be revealed since it will be drawn by hand and we don’t want that. 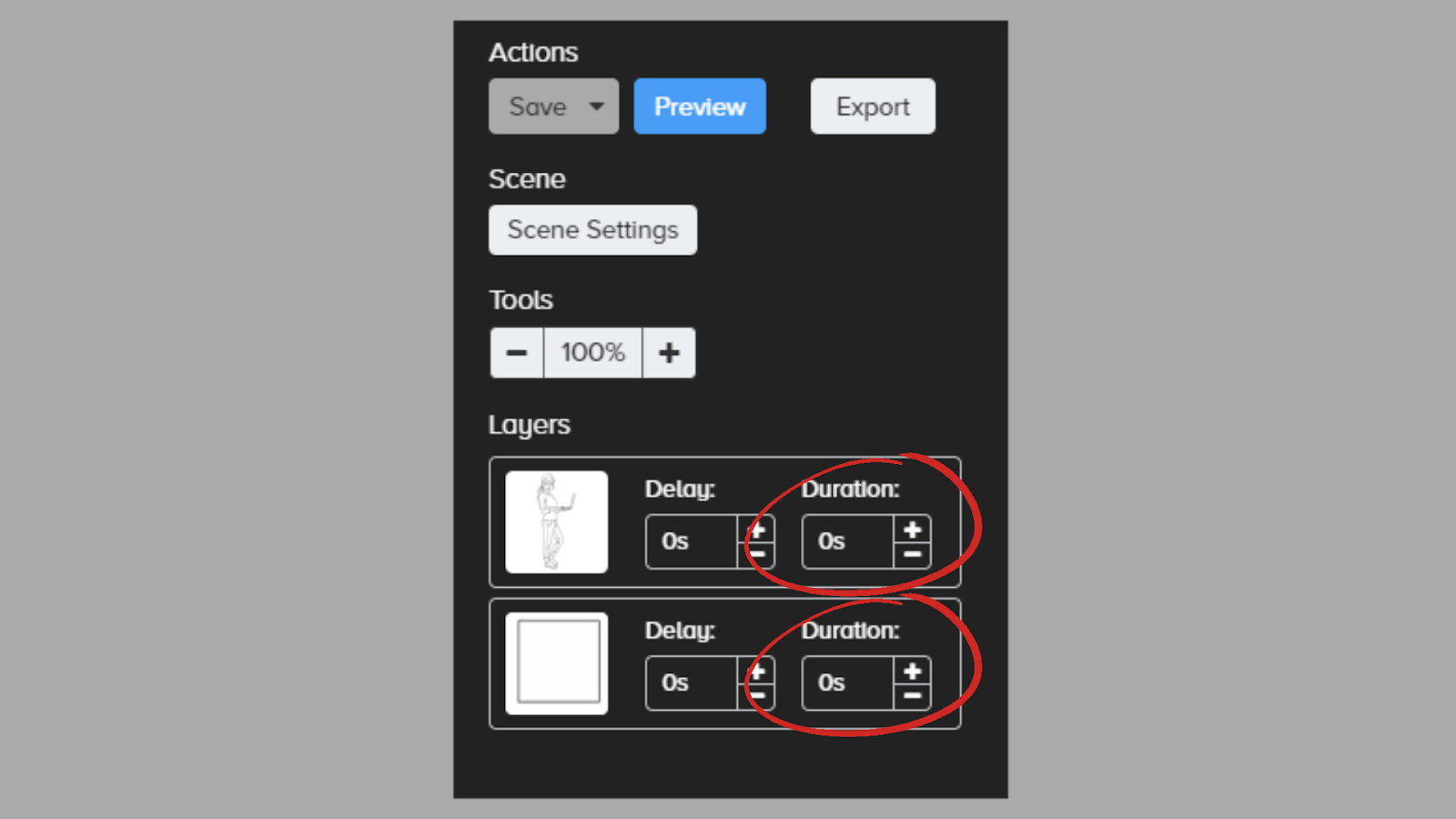 You can also edit your photo by adding something to it right after you crop your image.

Add transparency to the cropped image and add a caption to it.

Or, take out a portion of an object by cropping it.

And there we have it!

We finished the walkthrough on how to crop an image in Doodly. All these workarounds are very easy to do. You can try one of these techniques in one of your projects should you need to crop an image. Currently, Doodly is looking at the possibility of adding a feature that will help users crop images easily. We can’t wait to have that feature added and for sure you’re just as excited as we are. While it’s still not available, we can always try the 3 workarounds we discussed. We hope you enjoy our blog today. Until next time! 🙂

Video marketing plays an important role in promoting your products and services these days. To have high viewing rate, your uploaded video must be easy to understand and it should […]

Most videos that we create in Doodly are short video ads promoting certain products or services. It can be helpful to add a watermark on each video created, but what […]

Assets used on a whiteboard animation play an important role in making sure that we capture our audience’s attention. We need to know the right placement of assets within scenes. […]