How to Customize Drawing Movements

One of the many features of Doodly is the ability to create your own draw path. Draw path is used to create draw lines in an image. If you’re a Doodly user, you probably have already tried using the assets that are included in your package. All these presets have draw paths in them.

Apart from the presets, you can also use your own image to create your whiteboard animation. All you have to do is import them in Doodly. Unlike the presets though, imported images do not have draw paths so when you preview them, you will see that they are just being scribbled diagonally. Now we want our images to be drawn the right way just like our presets. To do that, we have to add a draw path in them.

You probably have read about our previous blogs talking about draw path. Well, today’s blog is a little bit different because we will look at the finer points of adding draw paths. It is going to be more detailed and we will talk about draw path precision.

Let’s take a look at how our preset and imported image is being drawn:

As you can see, our preset is drawn by hand following the draw lines of an image. The imported image on the other hand is being scribbled diagonally. As it scribbles, the image just magically appears. In real life, unfortunately, drawing doesn’t work that way. Draw paths make our hand drawing realistic and that is what we want to achieve.

There are two ways we can create our draw paths:

You can draw your image using either only one path, or use multiple new paths.

One path is usually enough to draw a simple image. If your image has more curves, more lines, and requires more details, we can definitely add more paths to it.

How precise should our drawing paths be?

In one of our tutorial videos, one of our commenters asked, “how precise do the drawing paths need to be”? To answer this question, we will work on some draw paths today.

We imported two images in Doodly: a black and white image and a colored one. We will apply draw paths to each and see if applying draw paths works the same way for both.

Let’s start with our black and white image. With our 1st image, we used 4 draw paths to complete our drawing.

We start by plotting small dots following the round face of our image. We made sure that the draw paths are a bit bigger than the black lines so we can fully cover them. Doing so makes our drawing look seamless when drawn.

We made sure that the draw path is properly positioned to fully cover the lines of the image. We did this by dragging the draw points, adjusting the paths that are near the image margins. The live preview will show the real-time drawing as we made those changes.

With a black and white image, it’s okay to have sloppy draw paths. Say your draw path is following a round shape, it’s okay to make some detours to cover other portions in your image. Now you might worry that getting off the round path might ruin your drawing. That might be the case if our image comes with several colors. Black-lined images go well with a whiteboard. That is because the white portions that your draw path is accidentally touching will just be invisible against the white. Having said that, you don’t have to worry at all. 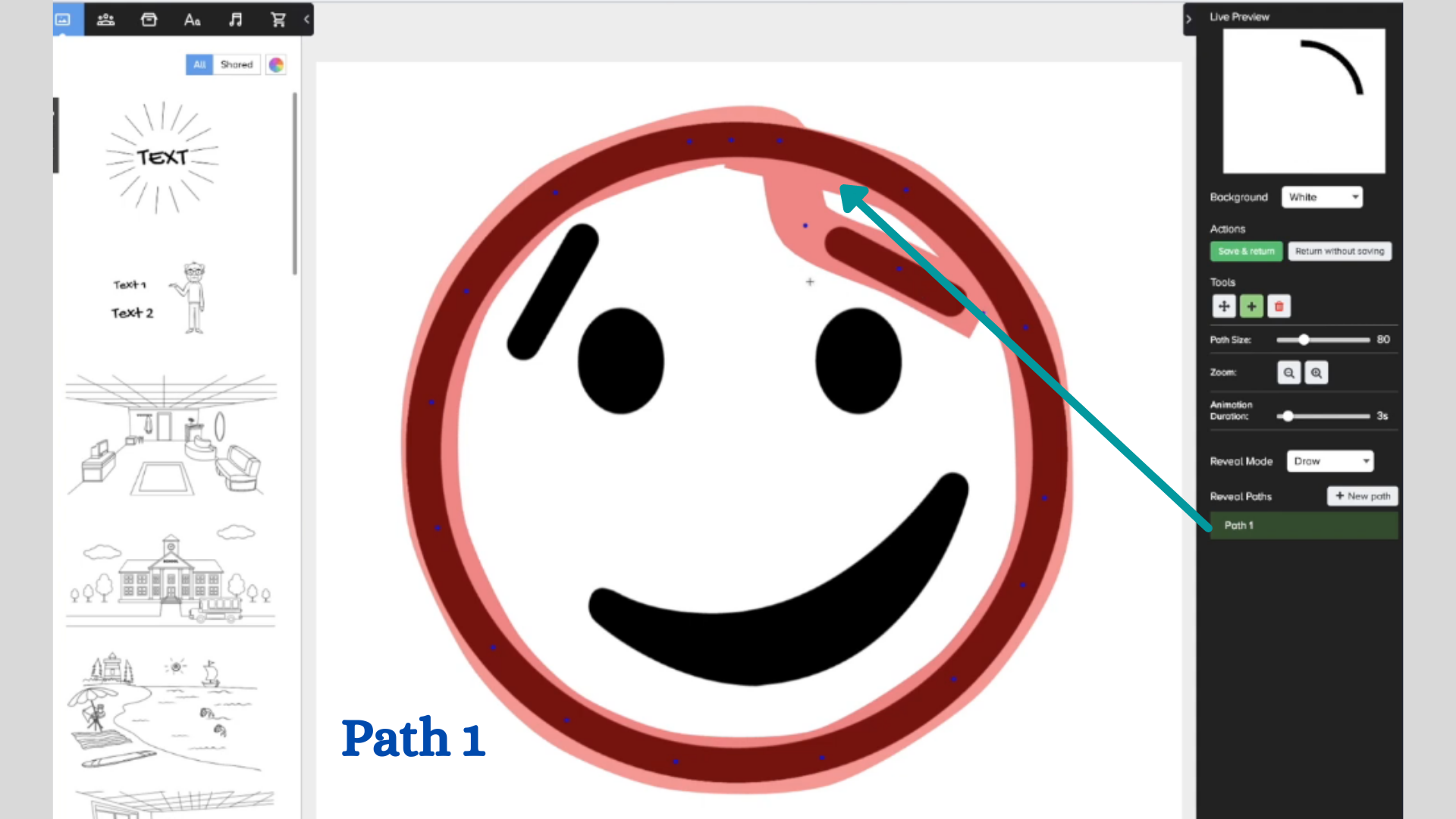 As for the second path, we placed small draw points in the right eye. We adjusted the path size to fully cover it. 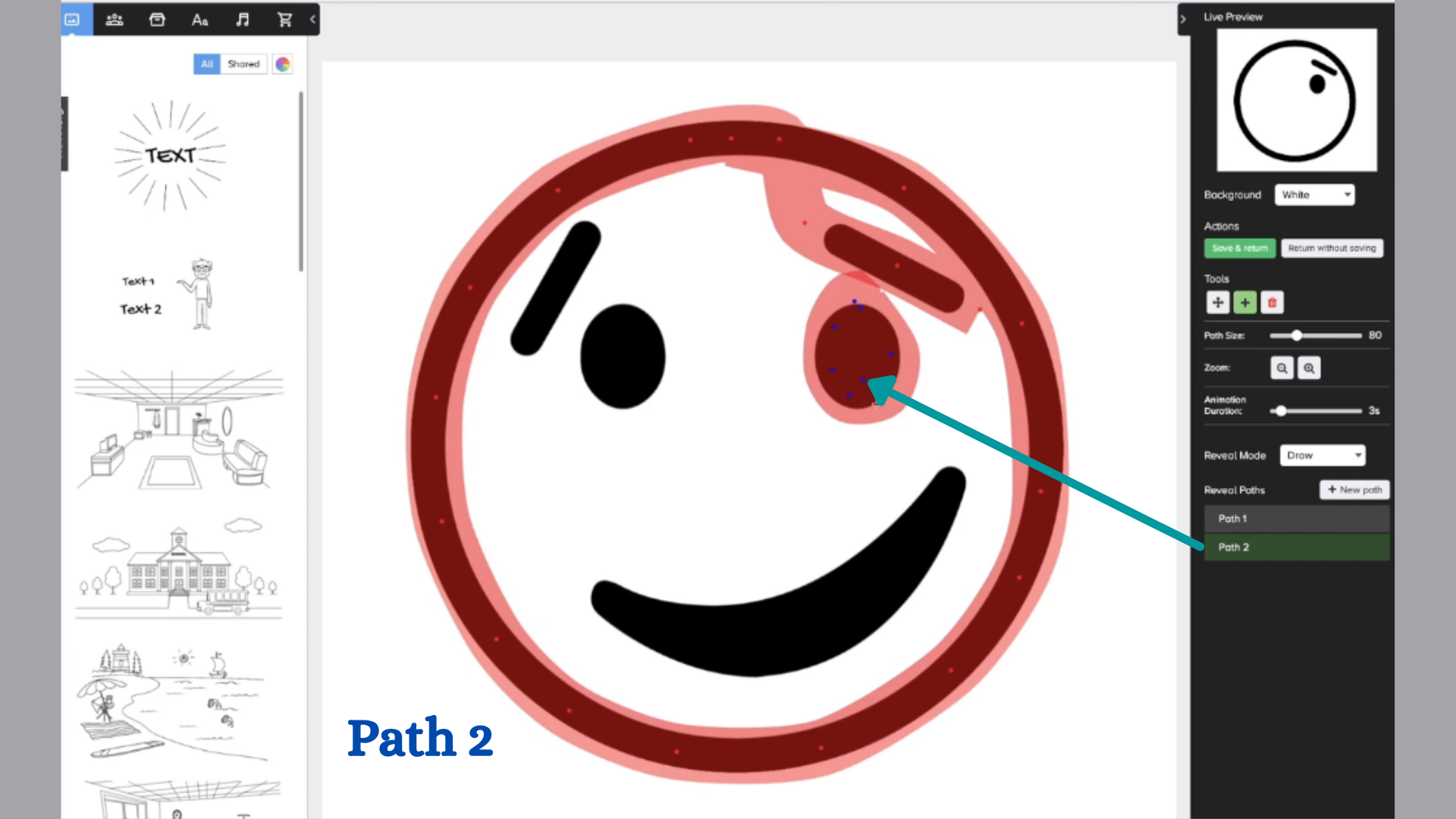 The third path is used to draw the left eyebrow of the image. Using the same stroke, we also covered the left eye with it by applying several draw points. 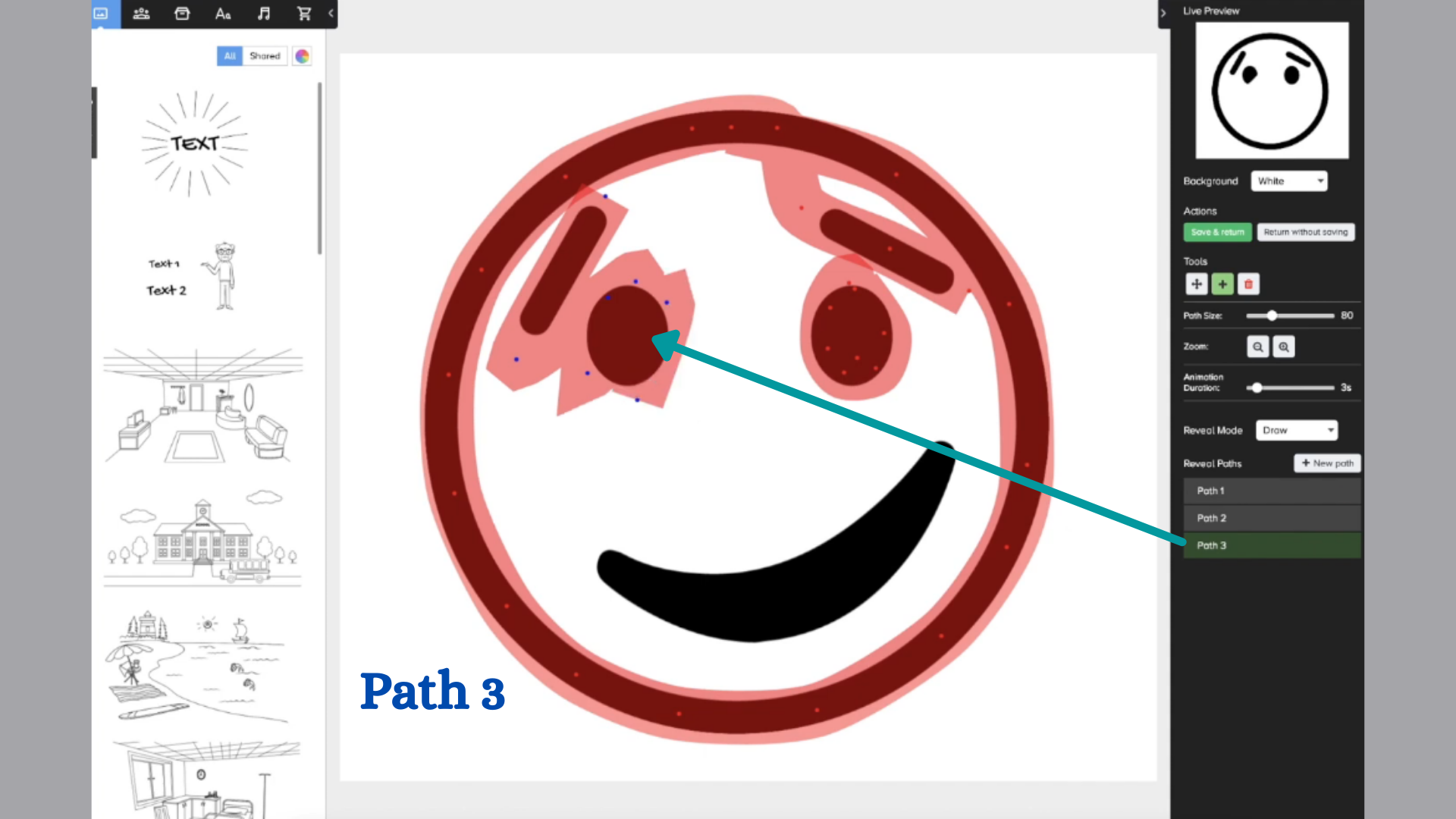 Lastly, we applied a draw path on the emoji’s mouth. We adjusted it by stretching some draw points to make sure that all edges are fully covered by the draw path.

Seeing the hand drawing our first image is amazing! Let’s see if we can achieve the same precision with our colored image.

Compared to a black and white image, a colored image requires more precision. This is because everything that our draw path touches is immediately revealed in our scene. For our colored image, we used 8 draw paths to complete our drawing pattern.

For the first draw path, we placed draw points tracing the edge of the face of our image. We increased the size of our draw path to capture as much area as we can. As you can see in the live preview, the draw path that we created is a bit sloppy. It revealed a tiny portion of the sunglasses and hair and we do not want that. To correct this, we adjusted the draw path start point by moving it down a little bit. The tip of our draw path should not touch the sunglasses or any portion of the hair.

We added the second path and worked our way to cover the next portion of our image’s face but it created a gap in the drawing. To fix it, we dragged the draw points to close the gap.

The next path is applied to the edge on the left side of the face closer to the sunglasses. Working on angles is a bit tricky. We need to adjust our path size making sure it only touches the edges that we’re working on. Always check the live preview to see if the draw path showing is missing portions of our image. If it is, then we need to adjust our draw path once again.

With our chosen image, the bottom portion of the black sunglasses is close to the face which is colored yellow. We can’t have the black lines showing in our drawing if we’re trying to draw the face. To address that, we dragged the draw path away from the edges of the sunglasses.

It’s okay to leave a little gap between portions of an image that both have different colors. In our case, the sunglasses and the face. You will be able to cover these gaps anyway when you start adding a draw path on the top portion of your image.

Sometimes, no matter how we try to be careful, the live preview still captures unwanted edges in our image. In our image below, we fixed the black tiny dots showing by dragging the draw path away from the sunglasses. 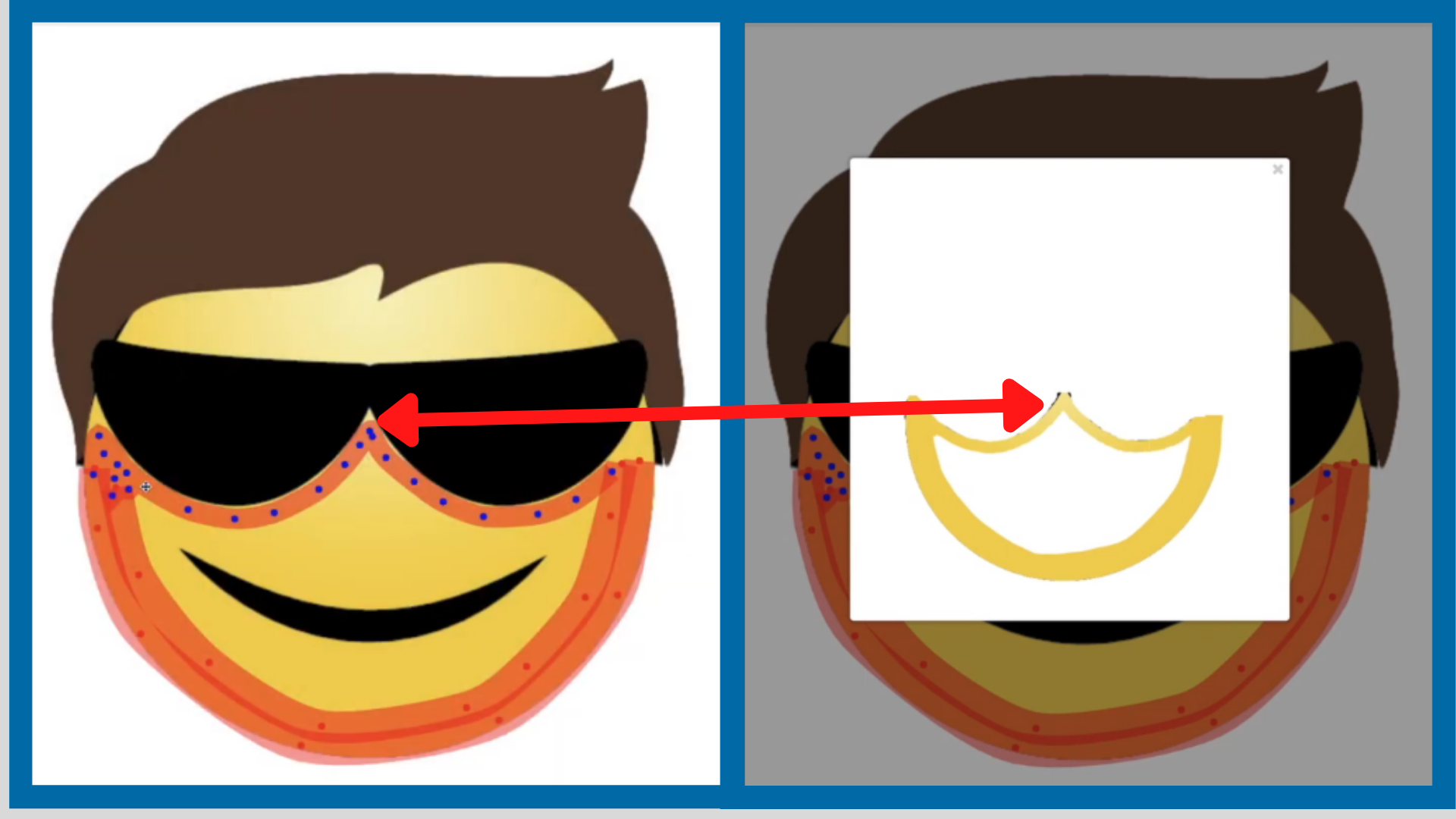 The next set of draw paths were plotted easier since both sides of the path were of the same color which is yellow. It won’t be touching the black sunglasses. We also adjusted the path size to cover more area in the face.

Now that we have completed the draw path of both images, let’s take a peek at our hand drawing:

The animation looks good for both images. No more scribbles.

We definitely had fun applying draw paths to our images. Now it’s your time to import your own images and apply draw paths. But first, let’s address these questions:

When creating a draw path, the goal is to get the illusion that you’re drawing your image one color at a time. Having said that, focus on areas in your image that share the same color and use one draw path to create your drawing.

It’s okay to not make perfect draw paths the first time you try. Precision takes time especially if your image is quite complex. Simple images are way easier to work on so practice on those first.

Let’s not forget that depending on your settings, your image will be drawn for 3-5 seconds only. With that in mind, it’s okay to have sloppy draw paths sometimes. Just enjoy working on your imported images and keep it fun.

Doodly is backed by a full 30-day money-back guarantee. Try Doodly for up to 30 days and if, for any reason at all, you’re not happy with your purchase, just contact [email protected] for a full refund. Our refund rate is a super-low, 2% (compared to the 15% industry average), so we’re confident you’ll absolutely love what Doodly can do for you.

Doodly’s main effect is drawing graphics and text on a whiteboard. Apart from drawing graphics, did you know that you can also create cool special effects within the software? We’re […]

One of the many features of Doodly is the ability to create your own draw path. Draw path is used to create draw lines in an image. If you’re a […]

The Power of Storytelling Sharing stories is an effective way of connecting with people. It is a powerful tool used to breathe life into every successful brand. It is a […]